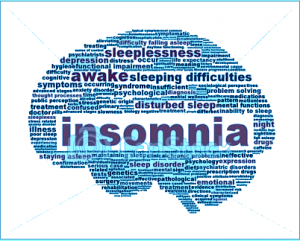 Many people experience “problems sleeping.” This can include “not getting enough

sleep,” “not feeling rested,” and “not getting good sleep.” This problem can lead to difficulties functioning during the daytime and have unpleasant effects on a person’s work-life, social-life, and family-life. Problems sleeping can be secondary to a medical illness (e.g., sleep apnea) or a psychiatric illness (e.g., depression). In addition to effecting sleep itself, many medical and psychiatric illnesses (including depression, anxiety and bipolar disorder) can be worsened by sleep-related problems. Therefore it is important to discuss sleep with one’s physicians and to make an effort to get an appropriate amount of restful sleep on a nightly basis. Lifestyle choices, such as aerobic exercise and eliminating the use of caffeine and alcohol, are important and often overlooked aspects of improving sleep patterns.

Insomnia is an inability to get the amount of sleep needed to function efficiently during the daytime. It is caused by difficulty falling asleep, difficulty staying asleep or waking up too early in the morning.

Insomnia is rarely a “primary disease” meaning an isolated medical or mental illness but rather a symptom of another illness to be investigated by a person and their medical doctors. In other people, insomnia can be a result of a person’s lifestyle or work schedule.

Insomnia is a very common problem with over one-third of all Americans reporting difficulty sleeping and approximately one-fifth of Americans with significant sleep disturbances. Insomnia is associated with increased risk of medical complications (including hospitalizations), increased mortality, poor work performance and social difficulties. Most sleep problems can be temporarily improved with the administration of a medication. One in 20 Americans is prescribed a medication with the sole purpose of improving their sleep. However, it can be dangerous to take a medication to improve one’s sleep without further investigating the underlying cause of the symptom with one’s doctor.

Transient insomnia can be cause for example by stress, traveling (e.g., jet lag), and may last for several days at a time. It can generally be relieved by simple interventions such as exercise, a hot bath, warm milk or changing one’s bedroom environment. Long-term insomnia lasts for more than three weeks and should be investigated by a physician with a potential referral to a sleep disorder specialist, which includes psychiatrists, neurologists and pulmonologists who have expertise in sleep disorders.

Insomnia related to a mental illness

More than one-half of insomnia cases are related to depression, anxiety or psychological stress. Often the qualities of a person’s insomnia and their other symptoms can be helpful in determining the role of mental illness in a person’s insomnia. Early-morning wakefulness can be a sign of depression which may also be associated with poor energy, impaired concentration, depressed mood or “sadness,” and a change in appetite or weight. On the other hand, a sudden dramatic decrease in sleep which is accompanied by increase in energy, or the lack of need for sleep, may be a sign of mania, (e.g., bipolar disorder).

Substance abuse can also cause problems with sleep. While alcohol is sedating in limited quantities, intoxication with alcohol causes numerous awakenings during the night for long periods of time and disturbs a person’s sleep patterns. Hallucinogenic drugs including marijuana are also associated with disturbances in sleep. Some sedative medications such as benzodiazapines (e.g., lorazepam (Ativan), clonazepam (Klonpin), alprazolam (Xanax), diazepam (Valium)) and barbiturates (e.g., Fioricet) may cause sleepiness during intoxication but can disturb sleep and cause serious problems sleeping in people who are addicted to or withdrawing from these medications.

Insomnia related to a medical illness

Many medical conditions can result in insomnia. The following is a list of some common conditions that are associated with insomnia:

Insomnia in children is usually due to stress and medication is not recommended prior to a thorough medical evaluation in persistent cases of insomnia. In some cases, the problem resides within the “sleep-wake circuits” of the brain or within neurochemical imbalances that affect these regions of the brain. Children with insomnia have often been poor sleepers since birth. As with adults, ongoing insomnia in children should result in a thorough investigation for underlying causes by one’s physicians.

Insomnia in the elderly

Insomnia in elderly individuals may be normal and the result of changes in the body’s “internal clock” which can also lead to early-morning awakening. Elderly persons are often more sensitive than others to medications. This is due to a change in the liver and kidney’s functioning and a more sensitive nervous system. This can lead to increased problems with sleeping due to medications prescribed for other illnesses.

Many elderly individuals are at an increased risk of experiencing anxiety and depression which can also disturb sleeping patterns in this population. Furthermore, some elderly people are also diagnosed with Alzheimer’s disease and other “dementias.” In addition to effecting memory, concentration, and emotions, these illnesses can have a profound impact on sleep. Many individuals with dementia are prone to become confused and restless at night, something which is often referred to by physicians as “sundowning.”

A thorough investigation of insomnia may require a multidisciplinary approach. Most people will begin by asking their primary care physician about their insomnia. These doctors will likely ask their patients to keep a “sleep-log” or a “journal” that describes their sleep patter over the course of days and weeks. It may including time spent in bed, time spent napping during the day, time asleep at night, and other information. A medical evaluation will likely involve blood tests including measurements of hormonal concentrations (e.g., thyroid testing) and concentration of minerals and vitamins in the blood (e.g., iron levels). Doctors will likely perform a physical examination involving a basic neurological examination. Doctors may also measure a person’s neck and look into their throat to assess for signs of illnesses including obstructive sleep apnea.

Some people may then be referred for a test called a “sleep study.” For many people, this will involve sleeping overnight in a hospital with wires connected to their scalp that measure the electrical activity of the brain during sleep. This test can be necessary in diagnosing certain sleep disorders including sleep apnea.

A complete list of treatments is beyond the scope of this review; however, a brief overview of some of the common treatments for insomnia will be discussed here. Insomnia can be very difficult to treat and many people may find that they use multiple treatments (e.g., both medication and therapy) to decrease their insomnia:

Relaxation Techniques—these may be helpful in helping people to feel “ready to go to sleep” and in decreasing the anxiety experienced by many people with insomnia associated with falling asleep. Listed below are a few different relaxation techniques:

Psychopharmacology—many psychiatric drugs are used to promote sleep in people with insomnia. One should be careful regarding the risk of becoming “over-sedated” by using other drugs and alcohol when taking some of these medications.

Benzodiazapines—these medications increase the feeling of sleepiness and also work to slow down the body and the mind. Some commonly prescribed benzodiazapines include temazepam (Restoril), triazolam (Halcion) and lorazepam (Ativan). These medications may be associated with memory problems (specifically when taken in large doses) and should not be used on a long-term basis as their effectiveness decreases over time. They are potentially addictive substances.

Antidepressants—these medications may be specifically useful for patients with significant depression, complicated grief, and other conditions. Common antidepressants used in the treatment of insomnia are trazodone (Oleptro), mirtazapine (Remeron), and drugs from the tricyclic antidepressant class, including amytryptiline (Elavil), doxepin (Silenor), and nortryptiline (Pamelor).

Other Medications—a class of medications called benzodiazepine-receptor agonists includes zaleplon (Sonata), zolpidem (Ambien, Intermezzo), and eszopiclone (Lunesta). These medications work similarly to benzodiazapines but are thought to carry less risk of addiction and dependency. Ramelteon (Rozerem) is a drug that works in the brain by mimicking a hormone (melatonin) that is associated with the sleep-cycle. Sometimes anticholinergic medications such as diphenhydramine (Benadryl) and hydroxyzine (Vistaril) are prescribed as sleep aides. In some cases, antipsychotic medications, including quetiapine (Seroquel) and chlorpromazine (Thorazine), are prescribed to help with sleep in patients with psychotic illnesses such as schizophrenia.

Ask your doctor if the medication he or she is recommending is FDA approved for your specific condition. If they are recommending a compound that is not FDA approved (an off label use), ask them to help you better understand their reasoning so you can make an informed choice.

Over the Counter Herbal Remedies—melatonin and valerian root are two herbal remedies that are available at many pharmacies and other locations. The efficacy of these treatments has not been proven for most patients and neither treatment has been approved for use by the U.S. FDA.

Talking Therapy—this can include traditional talking therapy (e.g., psychotherapy) as well as cognitive and behavioral techniques.

Sleep Restriction Therapy—this is a specific form of behavioral therapy that aims to increase “sleep efficiency” by decreasing the amount of time that a person spends in bed awake. This involves very strict rules regarding the amount of time that a person can lay in bed for at night which gradually increases over time. If this method works, a person is eventually “trained” to only be in bed during times in which they will be actively falling asleep or sleeping.

Other Treatments—some people find that light therapy (e.g., phototherapy) is useful in the treatment of their insomnia. This can be specifically helpful in people with a condition called “delayed sleep phase syndrome.” Biofeedback and hypnosis are useful in reducing insomnia for some people but these and other treatments are not discussed here for various reasons.

ShareTweet
Donate with Network For Good